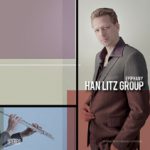 Latest edition to the Music & More roster is the ‘Han Litz Group‘. Welcome! When the soulful samba jazz flutist and composer Han Litz formed his own group it wasn’t about gathering together some musicians to play his songs. It was about bringing together some friends whose collective sound he knew would inspire him in writing customised compositions. After graduating from the Amsterdam Conservatory Litz went on to play with a variety of genrebounding bands: Flowriders, the Coltrane re-arrangers, Kindred Spirits Ensemble and DJ collective Supa Dance Jam. He has also shared stages with the likes of Louie Vega, DJ Maestro (Blue Note), Jazzanova, New Cool Collective, Zuco 103 and Osunlade.  The resulting debut album Epiphany showcases each of the musician’s singular sound and colours—as well as their ability to play for the greater good. Soulful jazz and Brazilian samba form the basis, while inspiration also comes from Dave Valentin, Jeremy Steig, Stevie Wonder and, yes, even Jethro Tull.