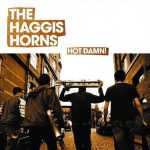 The infamous Haggis Horns hardly need any introduction, having been at the forefront of the UK funk scene since they came to our attention on the legendary album “Keb Darge Presents The New Mastersounds”. Having formed after meeting at Leeds Music College they have two funk-fuelled albums under their belt, ‘Hot Damn!’ & ‘Keep On Movin’ ‘ (First Word Records) and they have been rocking crowds the world over for years winning fans with their distinctive northern funk sound combining ass-shaking break- beats, afrobeat, soul and hip-hop.

So now it’s finally time to play The Netherlands. If you wanna be part of this funky party you can go check them out at Mijke’s Middag on May 25th, afterwards they’ll be playing the MC Theater for a full show. On may 26th they’ll be playing Jazz & Beyond in Dordrecht and on Monday May 28th you can go check them out at the Jazz in Duketown Festival in Den Bosch. Go treat yourself! Check out their short promo video