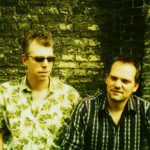 Heineken, Van Gogh, Kraak & Smaak. The three most famous things to come out of Holland. Ever. In that order. Ok so maybe a bit of an exaggeration but the last three years have been an incredible ride for the band considered to be Holland’s hottest live act and as they release their second album things seem set to get even crazier.

Rewind a couple of years and we find three Dutch guys plotting world domination from their hometown of Leiden. Since releasing their debut album Boogie Angst they have played over 200 live band gigs, they’ve been hailed by I-DJ as a “Must see live band” they’ve supported the stadium-rocking Faithless on their European tour and played some of the most prestigious gigs in the USA including Coachella Festival, SXSW Festival, the Miami Winter Music Conference as well as playing headline sell-out gigs on the West and East Coast on their last tour.

Although Kraak & Smaak originally started out as a studio project for the founder members Oscar De Jong, Mark Kneppers & Wim Plug it quickly became one of the hottest live and DJ properties in dance music. The live band has the addition of Rose – vocalist, Seb – MC and vocalist, Andre – drums and Marc on the bass guitar. Coupled with the keyboards, FX and percussion played by the band themselves it’s a formidable slice of funk on the floor with the epic moments provided by K&S’s more leftfield output. For DJ sets band member DJ Sargon, Mark and Wim are the main spinners capable of laying down an eclectic sound that makes them as happy spinning in the tiny basement of a deep funk night as it does dropping huge riffs to festival crowds.

In the UK, the boys have rocked shows for Club nights like AIR, Fingerlickin’ and Chew The Fat and Breakspoll Â For this summer they have Glastonbury, Bloom, Lovebox and Big Chill festivals lined up in the UK as well as Sziget, Lowlands and 10 days Off amongst others in Europe. Tours through the US and Australia are planned for November this year.

When it came out, their debut album Boogie Angst stood out because it sounded like nothing else around. The K&S brand of future funk led to their singles being supported by the cream of Radio 1. Annie Nightingale was the first to support the band and invited K&S to record a guestmix for her show. Annie Mac, Pete Tong and Rob Da Bank also came to the party with Rob even licensing their first single Money in the Bag for his Blue Room compilation CD. Their breaking sound led to a whole host of requests for remixes with Jamiroquai at the front of the queue as well as Mark Rae (a particular beauty of a mix that’s big with the jazz heads) Max Sedgley (who Rob da Bank asked the band to do a mix of), Richard Dorfmeister (whose Kruder&Dorfmeister Sessions album has been an inspiration to the band) and friends and family like Fort Knox Five, Soul of Man and Skeewiff. These remixes were collected onto a double album (they’d been busy) called The Remix Sessions which was released last year and since then Junkie Xl and Sam Sparro have also been added to their impressive re-rub list.

So after touring the planet in support of their debut album and remixing all their peers and heroes, the time came for the band to start recording their second album. In the early part of 07 they hit the studio for the first sessions with a second burst of recording after the summer festival season.

“The goodwill we got from our first album opened some doors for us” says mark  “We wanted to write with the people who are in the band as the core of the album but we also had met some people along the way who had got us excited and it was great that when we contacted them they wanted to work with us. We’ve got a killer track with Ben Westbeech on vocals which is lined up as the first proper single from the new album and another that we wrote with Mark Brydon from Moloko as the second. We’ve got vocal tracks with Rose and Ro in the bank and a killer track with rapper Dudley Perkins from Stones Throw who we’ve had respect for over time”.

“The new album is a bit more grown up than the first album” says Wim “We’ve worked with some of our heroes and that’s had an effect. We still want to write tracks that rock it on a dancefloor but we’ve also done an incredible cinematic track with Carmel who was a famous jazz singer in the 80’s.” “Our dream collaboration is still Thom Yorke from Radiohead though – so if anyone can hook it up we’re ready and waiting” interjects Mark.

“We’ve kept the trademark K&S sound of funk and Fender Rhodes on some of the tracks” says OscarÂ  “but tracks like Plastic People have a tougher edge. It’s a natural result of playing to bigger festival crowds and seeing bands like Faithless tear crowds apart with big dark riffs. We still want to keep the party funk element to our live show but you need those dark ride moments that make it happen for the big crowds. We were really pleased when Sander Kleinenberg licensed an upfront version of one of our new album tracks for his Renaissance compilation. I don’t think that would have happened with Boogie Angst”.

The band are still raving vinyl heads with Mark’s personal collection topping 50,000. He owns two vinyl record stores in Amsterdam and Leiden and is still a firm supporter of the format. Wim is also a vinyl man but studio head Oscar is more of a film buff. ” The track we wrote with Carmel would be perfect for a David Lynch film” says Oscar “and melancholic soundtracks can be a real inspiration for emotional electronic and downtempo music”.

Unlike some of their contemporaries the guys are looking forward to hitting the road with the band again. “I like the simplicity “says Oscar ” there is only one goal – get to the gig – do the gig – do the after party – move on. There’s no complications and you end up in these places you would never visit on holiday. If you go on holiday you go to a beach somewhere but the places we’ve seen we would never have seen if it wasn’t for the band. We’ve already had some massive high points like pulling into LA in our tour bus to play a sell out gig at the El Rey with our name up in the classic American style on the front of the theatre but we’re still a baby band, the best is yet to come – it will be a long time before you hear us moaning about going on tour”.

Kraak & Smaak released their second album Plastic People in April 08. The single Squeeze Me featuring Ben Westbeech was a hit across Europe and was supported by Pete Tong, Annie Mac, Zane Lowe, Annie Nightingale and Trevor Nelson on Radio 1. The band are gearing up for their second single Plastic People which will be released this summer and are currently in the studio remixing Sam Sparro’s second single.