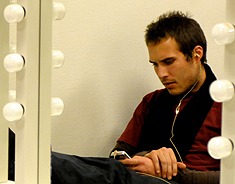 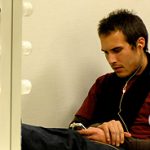 I was born and raised Charlie Vaughn by my parents Helen and Stephen Vaughn. At birth I was given up for adoption making me the biological son of singer/songwriter Kipp Lennon of Venice and Robin Bazzarone, marvelous mother of five.  Quickly jumping ahead 24 years, curiosity overcame me and I was able to contact Robin and Kipp as to, of course, meet them and, honestly, so I could tell two fantastic adults, “Thank you for making the right decision when you were two teenagers.” Since that meeting in 2005 all of us, including mom and dad Vaughn, have maintained a very close and meaningful friendship.

I grew up in Redwood City, which lies in the northern half of California listening to the music of Brian Wilson & the Beach Boys, James Taylor, Boyz II Men, a Harry Connick, Jr. album and even MC Hammer until moving to La Jolla, California, in the southern part of the sate, at the age of 10.Â  From that age on into my teenage years and carrying through the few years of college, I listened to and was influenced by (not necessarily in chronological order) music in the genre of Country to the lyrical songs of Ben Folds Five and the Counting Crows to the diversity and intensity of Sigur Ros, Modest Mouse, Social Distortion and Nirvana to the genius of local San Diego band No Knife to the styles of Tupac, Method Man & Redman, Outkast, and Del tha Funky Homosapien to the melodies and compositions of Bob Marley, The Band, Marvin Gaye, Van Morrison, and Paul Simon to the rhythmic guitar styles of Dave Matthews and Mike Doughty to discovering my favorite artist Tom Waits and favorite bands the Refreshments, Wilco and Radiohead.  Taking some jazz courses at Mesa Junior College in San Diego, as well as participating for the two years I was there as the main and only vocalist in the Mesa College Jazz Ensemble, I was fortunate to truly discover my favorite vocalists Ella Fitzgerald and Nat King Cole as well as many other incomparable Jazz composers, instrumentalists, and vocalists.

Through meeting Kipp, other Lennon family members, and friends I would not have made had I not met Kipp, I found even more musical admiration for great songwriters (some better late than never!) such as Neil Young, Rickie Lee Jones, Joni Mitchell, Grateful Dead, Ryan Adams (not, I repeat not Bryan Adams!), Josh Ritter, and Sufjan Stevens. Not to mention being able to have a front row seat, if you will, to the world and music of Venice, I have the utmost privilege of being able to write, record, and perform original music with bassist Mark Harris and lead guitarist/pianist/vocalist Michael Lennon.

Michael “Sticks” Lennon plays drums and vocals, Mark “Mr. Price” Harris of course plays bass, and my good friend Matt “the Pro” Puccio rounds out the Daily Routine on lead guitar and vocals (Matt “the Pro” Puccio is Kipp’s niece’s husband’s good friend from school). Of course many other musical infatuations have been left out for the sake of sparing you hours of reading from your day. If the above intrigues you enough to preview the music that I compose and perform with the Daily Routine, sometimes solo acoustic, sometimes just “the Pro,” myself, and our friend Rod “the Musicianist,” then please, by all means utilize the world wide web addresses below!