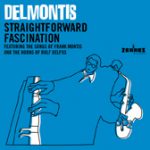 Finally: DelMontis’ first album ‘Straightforward Fascination‘ is finished and due to be released on the september 9th (ZenneZ Records). DelMontis is a balanced combination of sophisticated fat grooves, transparent songs and musical freedom. A fascinating mix of songs by Frank Montis and the horns by of Rolf Delfos are extended by first class musicians. The title track of the album features the British soul singer Laura Vane, who recently recorded a second album ‘ Sugarfix ‘ with Laura Vane & The Vipertones. The album will be available in The Netherlands on 09/09/11 and via www.delmontis.nl . Just a little later it will be available all over the globe. The digital release will be on the 12th of September (Itunes, Spotify etc). The band is also worth checking out live. See the calendar for dates.