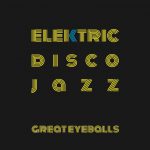 Elektric Disco Jazz is the second CD from the group Great Eyeballs. This album, released exactly one year after their debut album “Great Songs By …”, was out in January 2012 on ‘The Sand Records’ . They have opted for a concept whereby all the pieces overlap and run into each other. Musical interludes connect with acoustic soundscapes; disco and funk mixed with African grooves alternate with lyrical and atmospheric ballads. Like on their first album, they kept searching for new musical boundaries. On Elektric Disco Jazz you will be able to hear the development that Great Eyeballs has been through. With many live performances and inspired experimentation in the studio, the band seems to have reinvented itself within just one year: the sound is personal, warm and energetic. Go check out the album.