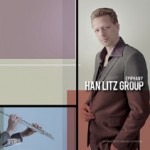 The Han Litz Group is preparing a remix album and a spring tour! For over a decade Han Litz has been playing live with DJ’s; since then he developed a strong passion for the combination of Jazz with danceable elements. As a reflection of this, the release will contain brand new versions of the group’s debut album Epiphany done by DJ/producers Nelson&Djosa, Monte La Rue, Hardsoul, CSPR, Phil Martin, D-Reflection and others. Also some new original music of Han Litz will be on it, which will of course be performed live by Han Litz Group. This is a good reason to announce a new release tour for spring 2013. Live venues in Amstelveen and Alkmaar already pencilled in and we set a date in march at the North Sea Jazz Club, Amsterdam. Will you be next to welcome the Han Litz Group?