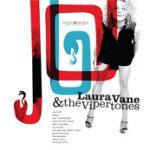 The official release of our debut album, Laura Vane & The Vipertones has arrived! Following regular airplay on German and Dutch radio shows, as well as being playlisted weekly on lots of BBC radio shows such as The Craig Charles Soul & Funk Show (BBC Radio 6) and Mark Lamarr’s (BBC Radio 2) God’s Jukebox, finally the album gathers heat and attention at online stores and in the hight street! We’re even cd of the week on www.radio6.nl!

The album will be released on Friday 28th August 2009 in Benelux, UK and across the whole of Europe, and a 12” of ‘Roof Off’ will also be launched just to wet the appetite! To get your copies or download the album, visit online stores: Juno, Play, Soundflat, HMV, iTunes, Amazon and ofcourse Bol.com or you can simply check out your local record shop.