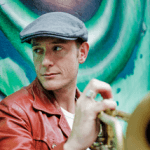 With his distinctive sound and energetic and lyrical approach, Rotterdam-based trumpet player Jan van Duikeren (1975) now ranks among a new generation of prominent musicians in the Dutch jazz scene. His extensive musical interests and outstanding versatility have ensured his success as a much sought-after solo player and side-man. This popularity has secured him an impressive array of musical outings with leading artists and bands representing virtually all musical genres. The list of notable musical artists with whom he has performed includes Candy Dulfer, Bløf, James Carter, Paul Weller, Trijntje Oosterhuis, Sheila E, Gare du Nord, the Metropole Orchestra, Leon Ware, Diana Ross, Lionel Richie, New Cool Collective, Temptations, Bob Brookmeyer and of course The Jazzinvaders!

On april 28th, Jan will be the featured member of the Jazzorchestra of the Concertgebouw.  They will perform a variety of  Jan’s compositions at the Bimbuis. Some of them were especially written for the orchestra, and will feature some of the finest players around. Don’t miss it! It will also be broadcasted by Radio 6