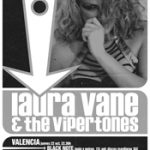 It feels like being in a rollercoaster these days with Laura Vane & The Vipertones. Firstly a little Spanish tour is coming up. Gigs in Valencia, Madrid & Bilbao are scheduled. Than in November they will perform at the WOMAD festival (by Peter Gabriel) at the Cran Canaries. Meanwhile they’ve been in de studio recording a new song that will be released in December (and already signed for several compilations) and like it’s not enough: The Herbaliser is gonna do a remix of a Laura Vane & The Vipertones traditional. That’s what we call: WICKED!