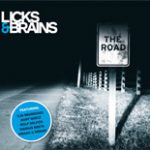 Licks & Brains, one of the Netherlands finest bigbands, is about to release their second album already! Leading Dutch radio deejay Giel Beelen can’t stop playing their tunes on Radio6. The album will be released on september 17th and will start with an early interview with conductor Rolf Delfos on Radio 6, afterwards they’ll be live on Mijke’s Middag followed by an one hour show in Panama. To close it off, they’ll perform also at Nachtegiel/Freaknacht on Radio3 FM. Of course the album can be bought via iTunes, Amazon, Spotify etc.