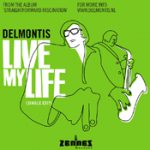 After the debut album ‘Straightforward Fascination’ released in september, DelMontis has been busy making a name for themselves by doing radio shows and other promotional concerts. They released a single edit from their album’s opener ‘Live My Life’ and after being mentioned in Giel Beelen’s ‘future music’ blog section and being played by Gerard Ekdom’s radio 6 show, DelMontis has been getting more and more airplay on a broad variety of stations. From Radio 2, Radio 6 to Arrow Jazz FM and more. Upcoming is another single release near the end of november, live radio shows at Radio Rijnmond, Radio 6 and Arrow Jazz FM. There’s plans for a video, some interviews lined up and an article/interview in the magazine ‘Jazzism’ is expected early 2012. DelMontis is going strong, writing new material and ready to jazz up the clubs & festivals next year! Stay tuned!