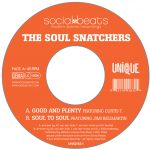 Is on it’s way. It’s been a while but the long expected new Soul Snatchers 7″ is almost there. After a very succesful spanish tour, The Soul Snatchers finally found the time needed to finish two brand new songs: ‘Good & Plenty’ ft. Curtis T. and ‘Soul to Soul’ ft. Jimi Bellmartin. Everything has been recorded, mastered and send off to the press to be released on Socialbeats/Unique hopefully some time in June. Meanwhile The Snatchers keep recording (at least that’s the plan) with a view to release their second full album in the beginning of 2010. Chances are, another 7″ will be released end 2009.