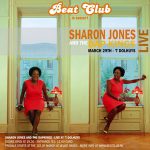 SHARON JONES was born and raised in James Brown’s hometown of Augusta, Georgia. Like many great soul singers, including James himself and Aretha, Sharon began singing in church at a very young age. With her natural sense of showmanship, her talent soon brought her beyond the Sunday choir straight to center stage as the lead singer of more than one up-and-coming Funk band. It wasn’t long before she was being booked to perform with the top names in Soul, including the Four Tops, Peaches and Herb, The Drifters, and Maceo Parker. During these years she quickly developed a mastery of her stage presence, learning how to use her smoky sweet voice to captivate audiences and bring them to the dance floor. It is this knack for working the crowd that has kept Sharon in demand with every kind of dance band.

Sharon had been no stranger to studio work, doing everything from Gospel and Blues sessions to Pop Ballads to Dance music Diva sessions (often credited as Miss Lafaye). However, it wasn’t until the late nineties when she hooked up with the Soul and Funk purists of Desco Records in New York that she recorded the singles for which she has become well known. Songs like “Damn it’s Hot,” “Switchblade,” “The Landlord,” “You Better Think Twice,” and a blazing version of J.B.’s “I Got the Feelin’” became instant club classics in the underground funk scene overseas. When Sharon first toured internationally with the Soul Providers in May of 1999, she was amazed to see the crowds who came out to hear her sing and even more amazed when they seemed to know most of the words better than her. In London, her fans have started referring to her as “The Queen of Funk”, something they got from one of her songs. She has just finished recording her own full-length album with The Dap-Kings to be released on Daptone Records. The first single “Got a Thing On My Mind”, has already become a fixture on the dancefloors of the international funk scene.

No matter where Sharon is or what kind of music she is singing, the strength of her gospel roots enable her to pour her soul into every note she sings and let anyone who hears know that Sharon Jones is Soul Sister No. 1!