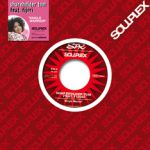 After two years of concentrated working on my bandproject “Familiy Vision Care”, I attended to my new project called “Shareholder Tom” lately. To commission a Remix of your own song, is not that easy. It is an amazaing feeling, if someone grapples with your material in a completely new way. And the eagerness while waiting for the result is almost maddening. The important thing is whom to confide your tracks. However, in our case we decided right: AIFF (Afro Influenced Funk Federation) from the Netherlands are experts like no other in transporting afrobeat and roots music into our time – without loosing a piece of the force and spirit of these wonderful influences. AIFF gave a completely different temper to Fijori “Single Warrior”, on which I’m now swimming through my everyday life for some weeks.

In December 2008 “Single Warrior” will be released as 7-inch on Soulplex Recordings.

Music & More is closely related to Social Beats Records , a young record label that in a short time proved to be a serious player. Almost all Social Beats related artists can be booked via Music & More.

Some of the artists from our roster are signed to the German Unique Records label that has been around for over twenty years. They proved to be very influential when it comes to 'today's dance music'.

Since 2008 Music & More has participated in the Dutch Nu-Jazz Movement, a movement that represents 4 leading Dutch Nu-Jazz groups like State of Monc, Monsieur Dubois, Scallymatic Orchestra and of course The Jazzinvaders.

Webdesignplus.nl powered this lovely website and has realized many websites for Music & More related artists.

The Beatcollective is one of the most influential party organisations in and around Dordrecht. Responsible for well known parties like The Beatclub & Soul Safari and concerts by artists like Sharon Jones & The Dapkings, Sugarman Three, The Budos Bands, Poets of Rhythm, Lee fields and many more.

Music & More is also responsible for programming events like Place d'Ary and theme nights like Jazz & Beyond and Jazzlab at Jazzpodium DJS.