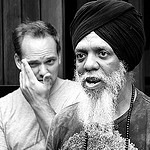 As you might have noticed, The Jazzinvaders had the privilege last summer to spend a couple of days in the studio with Hammond legend Dr. Lonnie Smith. Besides having a great time this will result in a full album which is due to be released on Unique Records in March 2013. That’s great news but it’s even greater to mention The Jazzinvaders ft Dr. Lonnie Smith will be available for some live shows in 2013!

The Doctor will be available for gigs at least in May 2013 and early June for sure. Probably also even later in 2013 depending on his other obligations. It goes without saying but if you’re interested in having this legend on your festival, don’t wait too long. To get in the mood already we’ve put together a little clip on one of the new songs ‘Song for Lonnie’. Do check it out and feel free to share if you like … clip.