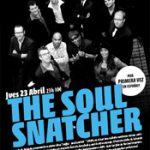 Last week The Soul Snatchers did their very first tour through Spain and to be honest… it was quitte a succes. Funk minded spanish loved the shows at The Boogaclub in Granada, Club Tempo in Madrid and at The Black Note Club in Valencia. Even the b-boys and girls could practice all their slick moves to the ultra danceable funk and soul by The Snatchers. After three days of giggin’ all ceedees and 7″’s were sold so it doesn’t come as a surprise the band will soon return to Spain. In august they’ll be playing one of the biggest spanish funk festivals: Imagina Funk Festival in Torres. Like it’s not enough, another tour is scheduled for November this year.