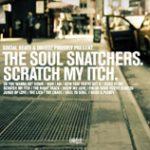 Finally it’s time to announce the long awaited second full album by The Soul Snatchers: Scratch My Itch. The album will be released on February 9th 2012 in Paradiso (afterwards you can go see D’Angelo) on Social Beats / Unique Records. The album is once again a feast for the listener containing lots of 70’s funk grooves, soulful vocals, powerful horns and a grindin’ Hammond organ, this all served with some ‘swampy’ New Orleans flavor. You will have yourself an album which brings you the best of The Soul Snatchers. Check out this teaser to get you started. Also the Snatchers can be seen at Jazz & Beyond February 11th in Dordrecht.