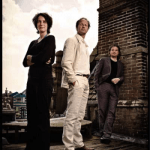 The mark of all great musicians in jazz history is their sense of tradition and progress. Stagnation is the death of jazz, and who would want dead music? – Ornette Coleman. Guitarist Reinier Voet sees his role in gypsy jazz in the same perspective. He doesn’t hide the fact that he is a great admirer of Django Reinhardt, but the founder of the genre has been dead for over half a century. And if he would have been alive today, he definitely wouldn’t have stopped at the music he had been making in either 1937, 1947 or 1953. He was a restless seeker for new, and typically European, directions on the road he had been taking. Reinier Voet has taken over from him, and has incorporated all of his knowledge of and love for jazz of the intermediate decades, as well as his European roots, into the music of his band Pigalle44.